I’ve always had a fear of being upside down.

Even as a kid, I never did cartwheels. I’m pretty sure I did headstands, but never was able to balance on my hands and didn’t feel comfortable being upside down in any way. 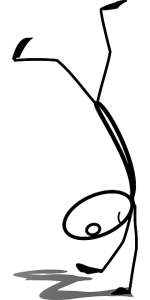 I used to look at people doing handstands, and thought to myself “I’d like to be able to do that”. How hard could it be?

Well, it turns out that doing a handstand WAS pretty hard — at least for me. You see, by the time I wanted to learn I was already over 55.

Are there some things you can only master if you learn them as a child?

My first “handstands” were done by messily kicking up to a wall, often in a panicked state, and usually I wasn’t successful in even getting up there let alone staying up there. I was terrified.

Even though I knew I was strong, I had no idea whether or not my shoulders and arms could support my bodyweight. And with that uncertainly, I held myself back.

The worst part, was that I had convinced myself that I wasn’t “built for handstands”. Somebody said to me, “Greg, why are you driving yourself crazy doing something that you’re not suited for?” And that comment stuck.

A year or so later, I met someone who convinced me to start working on them again, only with a proper training template that was designed for me – an older adult with limited shoulder and thoracic mobility. Setting aside my fears, I decided to give the inversions another try.

Rather than “kicking up”, I faced away from the wall, got my hands to the floor and “walked up”, with my belly facing the wall. That simple change took the fear away, as I was able to gradually get more of my bodyweight over my hands (rather than having it placed there all of a sudden), and only went as far as I could. In the beginning, I was on the wall at a bit of an angle, but over time I was able to get upright. Eventually I started working on straightening out my line.

My next step was to find a coach to work with. I was nervous about that as well, because frankly I was embarrassed to show how bad I was to begin with, and scared that I wouldn’t be able to improve even with help. But common sense prevailed, and I found someone who inspired me.

I hired Steve Atlas to work with online (he’s based out of Spokane, Washington) and he was instrumental in getting me to stick with the training and in giving me feedback on my movement. Steve is one of the few who truly understands what it’s like to learn new skills as an adult, and he’s an excellent movement and hand balancing coach.

As to progress, it’s been two years and I still haven’t mastered them. I’m certainly not where I want to be.

I can kick-up properly now (most times without touching the wall), find and hold balance. I look less like a banana, and my line is improving even with my mobility limitations. I can feel it. And this year I’m determined to ditch the wall completely.

But here’s the thing. I don’t even worry about the end goal anymore.

I just enjoy the practice doing handstands. And as long as I consistently work on them, I’ll keep getting better.

Who cares about how long it takes, or if I never get a perfect looking line? I’m enjoying exploring what I CAN do.

Here are my key take-aways from this handstand adventure:

In short, for many of us it’s not too late to learn something new — whether it be an exercise like a pull-up, a game like tennis or golf, or a more complex physical skill like a handstand.

I’m curious — is there a movement or skill that you’ve wanted to do, but feel like you’re too old to try?