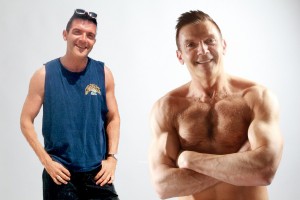 So I’ve arrived at middle age, and I’m happy to say that I’m healthy, strong and fairly capable. I’ve learned to fall in love with movement and physical challenges, and while I may not be the best at everything I attempt, I can still inspire.

It hasn’t always been that way. I’ve pretty much been through the wringer in terms of health challenges most of my life. This post, in a very small nutshell, is my story — as I transformed from sickness to wellness to fitness.

As a child, I was often sick. And as a young adult, I suffered numerous spontaneous lung collapses and underwent more than one pleurectomy (a procedure to remove the lining between the lungs and chest wall), was hospitalized for anemia, spent hours in an oxygen tent, and seemed to contract each and every major ailment that was going around at the time.  Even my later years were plagued with health problems — mostly stemming from chronic inflammation and the result of my body breaking down after having been through so much trauma.  Joint pain, stiffness, aching extremities, chronic fatigue, and an overall foggy feeling (as if I was slightly disconnected from reality) were my norms for quite a few years. Lupus was suspected, as was fibromyalgia, but never officially diagnosed.

Even as recently as 2006, I weighed 20 pounds less than I do now, but was carrying much more body-fat — over 20%. My sleep was poor, my stress levels were high, and my energy levels were low. I struggled to keep somewhat active, but wasn’t able to keep up with my workouts as autoimmune disease got the better of me. I was eating Advil like candy in order to manage the pain (mostly in my joints and limbs). Every four or five hours the pain would return — it felt like I had the flu for about 3 years. Multiple trips to various physicians didn’t shed much light on the problem, tests came up negative and all they could do was to continue to monitor my situation.

I decided I needed to turn things around.

I took my case to functional nutritionist and alternative health expert Bryce Wylde. I knew that Bryce approached problems from a holistic perspective and, based on his reputation and successes in treating people, I was intrigued to see what he could do with my case.

After a thorough consultation, booked in several sessions where we covered my individual issues, history, habits, lifestyle, etc., an evaluation was completed and a plan for treatment was given to me.  While chronic inflammation wasn’t the only culprit that was nagging me at the time, it was certainly thought to be paramount.  Given the link between diet, nutrition, and inflammation, Dr. Bryce wasted no time in sorting out my ‘gut’.

Digestive support was the first thing to tackle.  We started with a pharmaceutical-grade probiotic to restore the healthy bacteria in my stomach.  I was given a list of nutritional supplements to take, and instructed to take two teaspoons of fish oil per day.  Finally, I was given some general guidelines for an ‘anti-inflammatory’ diet, which restricted certain grains, dairy products, nightshades and other ‘trigger’ foods that may have contributed to a reaction of some sort.

What a difference a few months made!  All joint pain, leg pain, creaky knees, stiffness in the joints disappeared completely. I was able to stop taking pain relievers within a month of starting the treatment – and haven’t taken a single dose since – almost three years later.  When I started adding regular exercise into my regime, things improved even more (I’d been ‘going to the gym’ for years, but was sidelined for a long time due to pain).   Heavy lifting, kettlebells, conditioning, mobility and bodyweight workouts – I hit it all now.  And my joints and muscles have never been stronger or healthier.

What can you do to keep inflammation at bay?

Proper nutrition plays a key role, as many foods are inflammation protagonists.

Here are some pointers:

Following these guidelines helped me, and I hope they help you as well.